Trampolines are great for everyone of any fitness level. They offer immediate success with opportunities for endless new challenges. And they are incredibly fun!

CURRENT AAU MEMBERSHIP IS REQUIRED TO COME BOUNCE. Find out more about the quick sign-up steps in the 1st Time section below.

1. Register as a trampoline club athlete – for insurance purposes, we require a current AAU membership 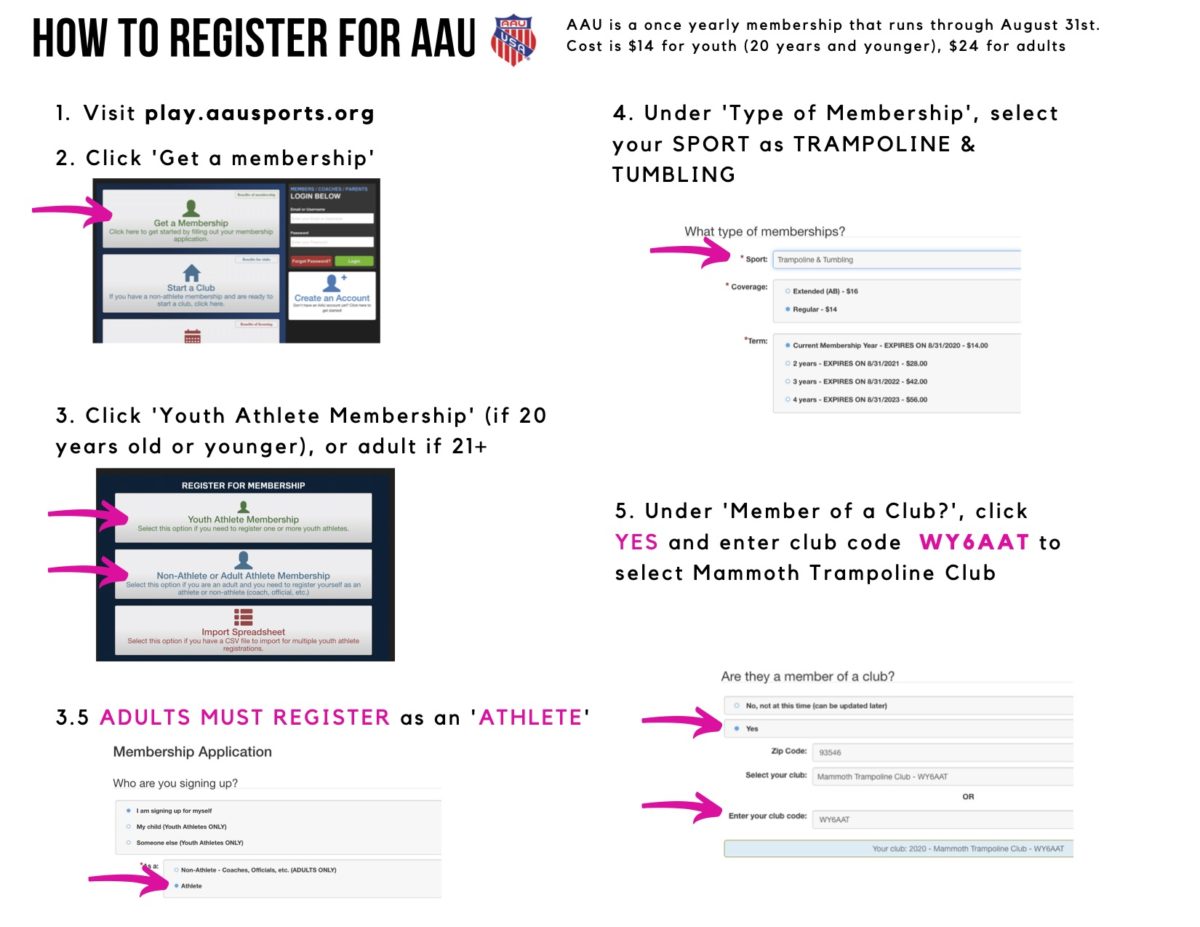 2. Sign the waivers at the front desk, or print and bring it with you

* The downloadable waiver is here for your reference. Signing at Snowcreek’s front desk is all you need to do.

What is AAU? Why are you required to sign up to bounce in our facility?
AAU stands for the Amateur Athletic Union, with whom the MTC is registered as a trampoline training facility. The AAU requires that anyone using our facility be registered as a Trampoline Club Athlete. AAU membership is an annual membership that must be renewed yearly, every August 31.

Why Is the Bail Out Class and Checklist Mandatory?
Though back flips & front flips may seem to be easy tricks, should an athlete get lost in the air, the impact on the body is intense and the consequences are very higher. By taking the time to develop air awareness and a strong body that is familiar with the impact of a trampoline, athletes greatly reduce the chance of injury. It is in the best interest of the athlete that the fundamental trampoline drops be learned and practiced before attempting higher consequence skills, such as flips. In order to keep our doors open, the Mammoth Trampoline Club wants to ensure that everyone can advance their skills with safety.

We require that the athlete have a proficient backdrop and demonstrate a mastery of all of the skills on the Bail Out Checklist to be able to pass the Bail Out Class. Backdrops require a significant amount of core and neck strength, and if the athlete should get lost in a rotation, this is primarily the position in which they will land on the trampoline. It takes time for core and neck muscles to develop and be able to cope with the impact. You must therefore demonstrate that you can complete the checklist with consistency and full control.

As much as this sounds mundane, our regulars will gladly confirm that learning the mandatory bail out skills levels up everybody’s trampoline game. Bail out skills serve as a rock solid foundation that will make you have more fun and learn new steezy tricks much, much quicker.

360’S Left & Right
Athlete must be able to jump and twist 360’s degrees of rotation, also known as a full twist. They must be able to do this to the right and the left.
SEAT DROP 180 TO FEET Left & Right
Athlete must be able to perform a seat drop and as they come up to their feet, spin 180 degrees before they touch the trampoline again. This is also known as a half twist. The athlete must perform this skill to the right and left
SWIVEL HIPS Left & Right
Athlete will perform a seat drop, thrust their arms and hips upwards, look over their shoulder to rotate and land in another seat drop without putting their feet down. Must be performed both directions.
BACK DROP 180 TO FEET Left & Right
Athlete’s will perform a backdrop and as they come up from the drop, twist their hips 180’s degree before they land back on their feet. They will be required to be able to twist to the right and left.
BACKDROP PULLOVER: Feet, Table and Stomach
The athlete will perform a back drop with their feet pointed more towards their head.They will then allow the momentum of the bounce and the position of their feet to pull their feet over their head, landing on their feet for the first drill. The second drill lands in table drop and the third lands in a stomach drop. This skill demonstrates the ability to show control of the momentum of a flip.
10 BACKFLIPS, 3 WITH A STOP-BOUNCE LANDING

The athlete must perform a backflip without a spotter 10 times. Then 3 more that are landed with a stop bounce. The backflip must demonstrate skill and control, not a flip that relies on whipping the head back for momentum to finish the rotation. The flip must be initiated from the lower body. Athlete must demonstrate enough skill and confidence that the MTC Coach believes they can land a flip on the quicker trampolines located on the Chilly Bin without assistance.

This is essentially a front roll or a ground front somersault on the trampoline. They will jump into a table drop and roll forward on to their back and up onto their feet. Next they will perform the trick shown which simply skips the backdrop.

10 FRONT FLIPS
The athlete will start by performing flips from the trampoline onto a pad with a spot by the coach.
BACKRDOP 180 TO BACKDROP Left & Right
Athlete must be able to perform a backdrop with a 180 out that leads straight into another backdrop without placing their feet on the trampoline in between the skills. This trick must be performed to the right and the left.
180 TO STOMACH DROP Left & Right
The athlete will bounce and look over their shoulder to fall into a stomach drop. This is the first step in the 360 airplane progression.
360 AIRPLANE Left & Right

This trick is combined with the 180 to stomach drop skill from before. Athlete will begin the move by acting as though they are moving into a stomach drop. However, instead of landing on the stomach, the athlete will pull their arms into a twist and land on their back instead. Skill will be performed to the right and the left.

360 LOG ROLL Left & Right
This skill is performed with the body staying parallel to the trampoline as it twists. The athlete will perform the backdrop and then drive their hips and feet up into the air as they look over their shoulder and pull into a full twist landing in a backdrop again. It is simply the backdrop 180 to stomach drop 180 to back drop without the stomach drop in the middle of the skill. This skill must be performed to the right and the left.

Want to progress your bouncing or get a certain trick dialed? Come to any Progression Session and let a coach help you achieve your goal! Progression Sessions are coached sessions for ages 7+ to improve trampoline skills, trick progressions, and over all bounce-ability. 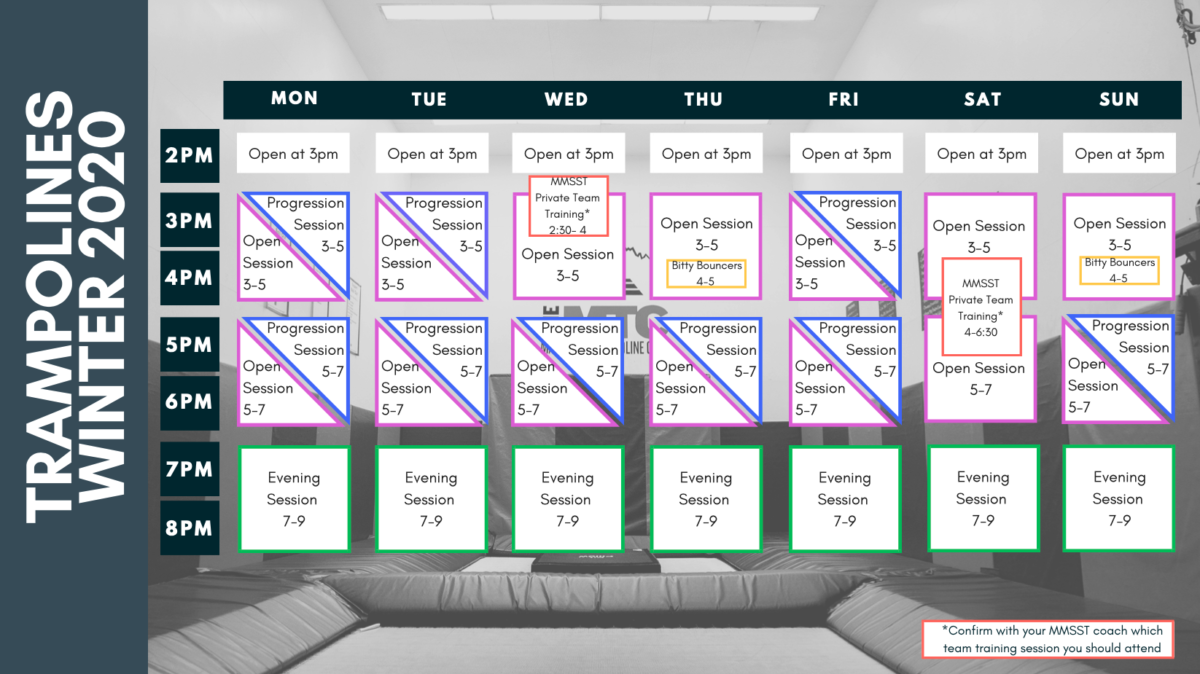 Meet Kain
My name is Kain Wilmot and I have lived in the Eastern Sierras for a greater portion of my life. I grew up skiing with the Mammoth Freeski Team, and learning tricks on a trampoline has greatly progressed my tricks on snow. Trampolines have not only helped me progress on snow, but they have kept me active, and gave me a safe way to learn new tricks. I am very happy of be part of the Mammoth Trampoline Club, and excited to teach anyone who wants to come bounce. I started skiing when I was 2 at Mt. Snow, VT and it has always been my favorite thing to do. I started competing in Moguls, Aerials, and even Ballet before it died when I was 10 and eventually started skiing in the park as I got older. I continued competing all through high school and after graduation moved straight to Mammoth. As many others have, I fell in love with what the mountains have to offer in all seasons and have made Mammoth my home. Meet Brandon
I grew up skiing on the East Coast. Which consisted of ice, rain, and chunky stuff. Out of high school I spent multiple seasons in Colorado, Hawaii, and Tahoe. The last few years I was a Freeski/Trampoline coach at Woodward Tahoe. I recently moved to Mammoth Lakes for multiple coaching jobs and I couldn’t be happier to be here. I grew up cheerleading and continued to do so through college at Fordham University in NY where I graduated with a degree in Entrepreneurship. After college I moved out to Mammoth Lakes and have loved it ever since. I did 5 back to back winters between Mammoth, New Zealand, and Australia, and then moved to Tahoe for a year and had a great time working at Woodward Tahoe. In addition to working here at Mammoth Trampoline Club, I also work for ski school at Mammoth Mountain. We are so lucky to have a great facility like the MTC here, and I truly love working here. Come progress towards those tricks you want to try on snow, or just bounce around for a great workout!

We at Mammoth Trampoline Club want to make your wildest trampoline dreams come true! Ask us about our special programming including, but not limited to:

For all special programming, every trampoline participant must purchase AAU and sign waivers before bouncing. All participants must complete a Trampoline Orientation with the coach prior to bouncing. More in the 1st Time section above.

Reservations are dependent on staffing and must be booked at least 1 week in advance.

Email the manager at: mammothtrampolines@gmail.com

We’re open 3-9pm every day of the week

Do you want to be a sponsored athlete for Mammoth Trampoline Club?

Please email us at MammothTrampolines@gmail.com